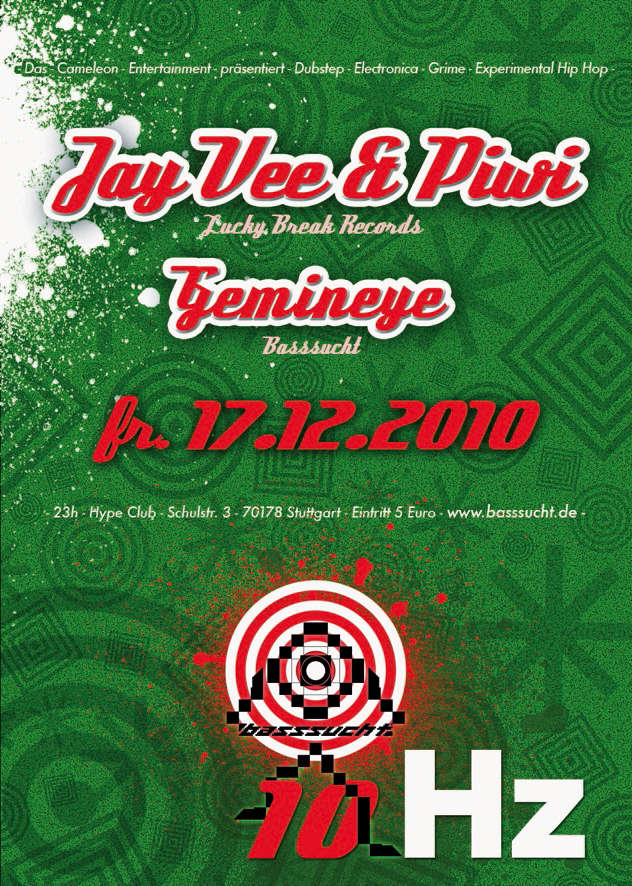 The two Stuttgart-based DJs Jay Vee & Piwi started their career in early 1995 and met in 2001. From then on, they decided to establish the irresistible vibe of breaks in Stuttgart’s club scene. Only one year later, they started their first occasional events, which eventually led to their party series “Lucky Break”, the first monthly event for mid-tempo breaks in Stuttgart. Due to the positive response of the scene and great bookings, “Lucky Break” became one of the longest running parties of its kind in Germany, existing since 2004. Artists like Shut Up And Dance, Superstyle Deluxe, Altern 8, Circuit Breaker, Hardy Hard, Ed Solo, Baobinga and Flore provided the full range of breakbeat music for over five years. During this time span, the duo started to produce own tracks as Jack Stat. Their first tune, “Pump’n’Refresh” got signed to Berlin’s pioneering breakbeat label “Dangerous Drums” on the spot. Other tunes were released on various compilations. Now, with their own label “Lucky Break Recordings”, they released their singles “The Spirit”, “Bombaman” and “Chemistry (ft. Liz Melody)”. The label is highly acclaimed by the international breakbeat scene, with support from DJs like Plump DJs, Annie Nightingale, Shut Up And Dance, Circuit Breaker, NAPT, Maelstrom, Paul Bassrock and more. Their approach in music production is the same as the label’s: providing party tunes that show all flavours of breakbeat music. This approach is the reason why Jack Stat are increasingly busy in the studio, producing own tracks as well as remixes for labels such as Dangerous Drums and Ground Level. Jay Vee & Piwi alias Jack Stat have also been busy deejaying not only in their home town, but also in various German cities like Frankfurt, Munich, Leipzig and Berlin as well as in Switzerland, USA and England. The gig-highlight in 2010 was without a doubt their DJ-Set at the popular German festival “Sonne Mond Sterne” in August, where they played together with Stanton Warriors and B-Phreak. In the same month, Annie Nightingale featured an exclusive mix by the two in her legendary radio show on BBC Radio 1. Nevertheless, they are still very active as party promoters in their home town Stuttgart. At the moment, they are running three event series: “Bassbehandlung” (Dubstep), “Versus” (Breaks and Dubstep), and “Pleasure Yourself” (NuFunk and Breaks). And there’s good news:
Their story has just begun…